What not to Do When Promoting ICO in the U.S. 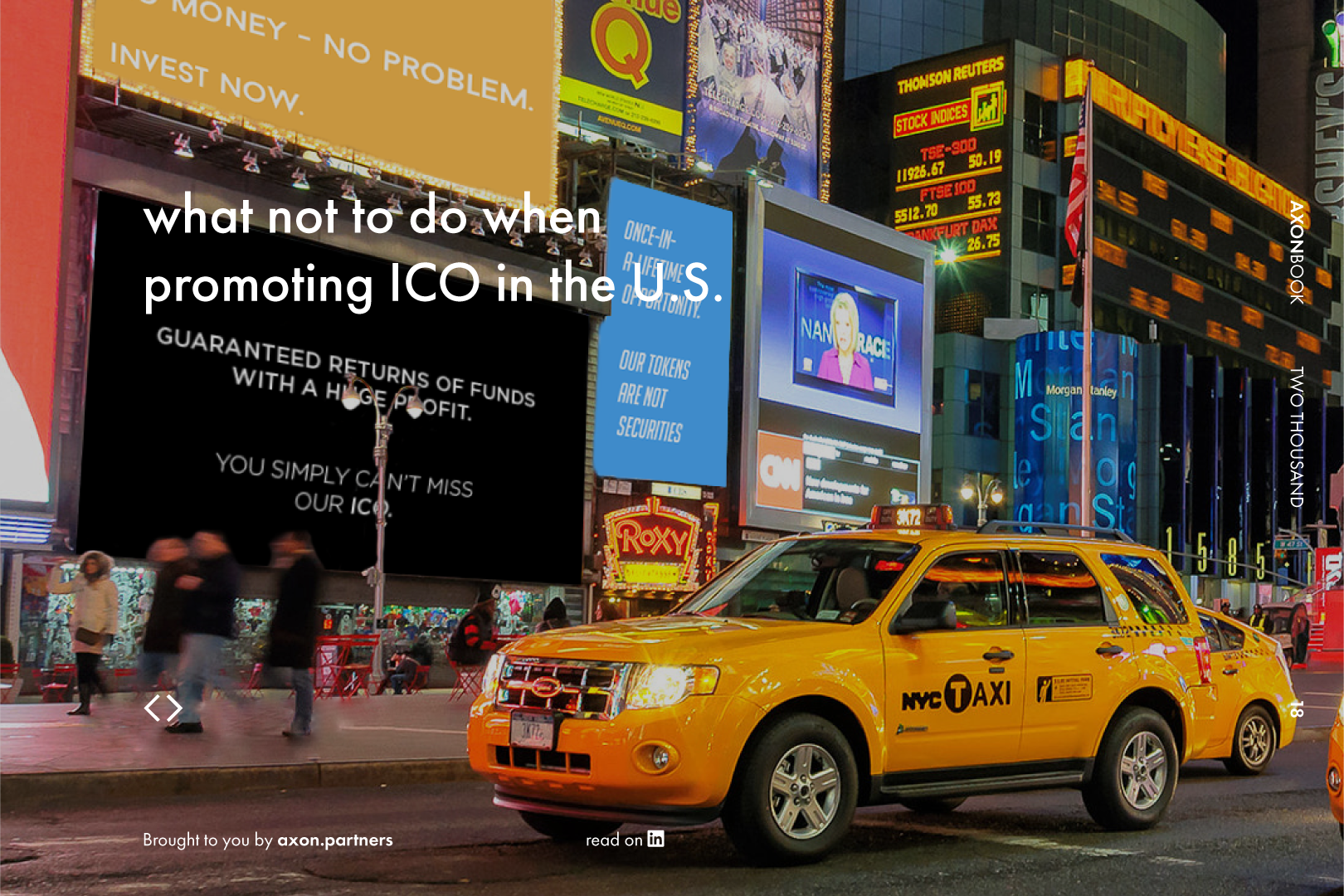 Some of you may remember the day when Facebook has banned the ICO and crypto ads. The announcement claims that such promotion is used to encourage people to participate in different investments, but usually in a misleading or deceptive manner.

Now, this is Google who follows the suit. As of June 2018, cryptocurrency-related and similar ads (ICO, cryptocurrency exchanges etc.) will be restricted, unless the advertisers comply with the licensing and certification requirements.

Is there something wrong with those guys? Actually, no. The matter is that on 1 November 2017, the Securities Exchange Commission has published its Public statement regarding the potentially unlawful promotion of ICOs. The SEC has stressed that “virtual tokens or coins sold in ICOs may be securities, and those who offer and sell securities in the United States must comply with the federal securities laws”.

Therefore, the promoter might be held liable for the potential violations of the anti-fraud provisions of the federal securities laws, for participating in an unregistered offer and sale of securities, and for acting as unregistered brokers.

In this feature written exclusively for lawless.tech, Olena Naumchyk, Associate at Axon Partners, analyzes the securities legislation in the U.S. and the SEC Reports and identifies what “not to do” while promoting ICOs in the U.S.

You’re Just Too Good to Be True

The SEC presumes that an investment which looks overpromising and offers prospects of a substantially greater return compared to the returns on established and well-known stock indexes has a high risk of being a fraud. Thus, the following catchwords are actually a red flag for the investors: “INCREDIBLE GAINS”, “BREAKOUT STOCK PICK”, “HUGE UPSIDE AND ALMOST NO RISK!” etc.

Considering the nature of investment which by default entails a certain level of risk, a 100% guarantee shall mostly be accompanied with a low return. If the ICO advertisement offers an extremely high guaranteed return and operates with the slogans like “CAN’T MISS OPPORTUNITY” or similar, it will be recognized as a fraud by the SEC.

The advertisement that rushes one to invest immediately is also in the SEC’s crosshairs. If an ad urges you to invest right now without giving any reasonable grounds for that, and does not allow one to submit any detailed request for information (via mail, social media etc.), it is likely to be considered a fraud.

Consequently, investments which are pitched with the help of phrases like “ONCE-IN-A-LIFETIME OPPORTUNITY”, “BASED ON INSIDE/CONFIDENTIAL INFORMATION”, “GUARANTEED RETURNS OF FUNDS WITH A HUGE PROFIT”, “HIGH-YIELD INVESTMENT PROGRAMS” or similar will trigger the SEC’s close attention.

An ICO sales pitch which is not requested and comes from an unknown sender is considered by the SEC as a high-risk possibility of a fraudulent investment scheme.

You should better avoid any form of the unsolicited communication, namely:

Look Before You Leap

In the SEC’s Report on Investigation Concerning the DAO, the Commission warned that virtual tokens or coins sold in ICOs may be securities, and those who offer and sell securities in the U.S. must comply with the federal securities laws.

Therefore, before the advertisement is posted, do not forget to check whether a particular token falls under the definitions of security outlined in the Securities Act and the Exchange Act.

In the U.S., the most suitable and widely spread approach to determine whether a particular instrument constitutes a security is to pass the Howey Test, the Family Resemblance Test, and the Risk Capital Test. Note that each of the tests can be interpreted in different ways, depending on the state, judicial instance and the particular circumstances of the case. We described only the generally accepted criteria.

In the context of blockchain tokens, the Howey test can be expressed as three independent elements, all of which must be met in order to consider the token to be a security. In order to make it to the SEC’s crosshairs, the campaign shall involve:

The Howey test is the only securities test which is adapted for the distinctive features of token sale. The applicability of the Howey test elements to ICO-specific peculiarities has been stipulated in the aforementioned SEC’s Report on the DAO.

A separate securities test is the Reves “family resemblance” test from the U.S. Supreme Court decision in the Reves v. Ernst and Young case (1990). It determines whether a bill should be classified as a security.

The test starts with the default presumption that a bill is a security, but this presumption could be rebutted if it bears a “family resemblance” to one of the categories below on a judicially developed list of exceptions. The test considers:

Note that, unlike the previous test, it doesn’t necessarily require all factors to apply, but the “strong resemblance” should be proved in this case.

In 1959 the California Supreme Court (Silver Hills v. Sobieski case) has adopted an additional securities test, which is now applicable in 16 states. The states may use different frameworks to judge what constitutes a security. In California, the risk capital test considers whether there is an attempt by an issuer to:

Who Let the Tokens Out?

In no way should you promote ICO/tokens, unless you are aware of the ICO project’s compliance with laws and the tokens nature.

The federal securities laws require securities offerings to be registered with the SEC, unless an exemption from registration applies. If a token constitutes a security, a registration or license status of such ICO need to be checked (use the search tool on Investor.gov). The registration exemptions require the investors to be accredited.

No Money, No Problems

The advertisement may be unlawful if it does not disclose the nature, the source, and the amount of any compensation paid, directly or indirectly, by the company in exchange for the endorsement.

In other words, if the project team provides the promoter with either the money or other valuables in exchange for the advertisement of the ICO or tokens, it shall be described properly in the endorsement not to mislead the investors. Therefore, it is necessary to place a disclaimer with all the information regarding the nature: whether it’s paid for, free of charge etc. In the former case, the paying party and the amount of remuneration obtained by the promoter have to be specified.

If either tokens or coins are considered securities, it should be explicitly explained in the advertisement. The promotion of an unregistered sale of securities constitutes a high risk as it may entail liability for the violation of the anti-fraud provisions of the federal securities laws. Therefore, the promoter should ensure that the ICO is registered according to U.S. laws and provides an appropriate notice in the advertisement.

When promoting utility tokens or coins, it is better to avoid using terms like “Initial Coin Offering” or “ICO” as investment-related language like “returns” and “profits” encourages buyers to buy a token for speculation, rather than use. In return, the “Token Sale”, “Token Generation Event”, or “Fundraiser” may be used to highlight that the sale of tokens gives the right to access and use the network.

Please note that this article is made for informational purposes only and is not intended to and should not be relied upon or construed as a legal opinion or legal advice regarding any specific issue or factual circumstance.